The first lines of the rhyme go like this:

“Ten charming little maidens sneaked out the pen
Grandma caught one of them and they were only nine left.”

In this first episode of The adventures of Theodóra, the doll Theodóra and her friend Henríetta don’t really “sneak out of the pen” – but almost. And the grandmother does catch one but not on purpose and… if you want to know more, start reading the story!

Patterns and kits for the dolls, the dog and doll clothes by Hélène Magnússon can be found here.

OUT OF THE PEN 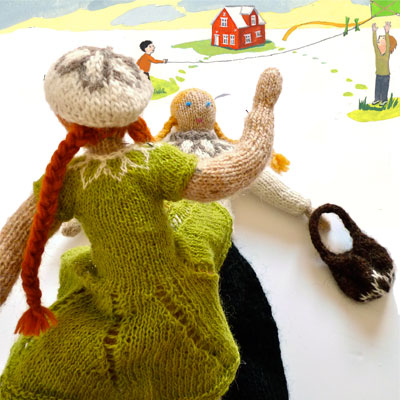 “Tada”! Henríetta swirled around so the dress swayed like a green meadow in a light breeze. 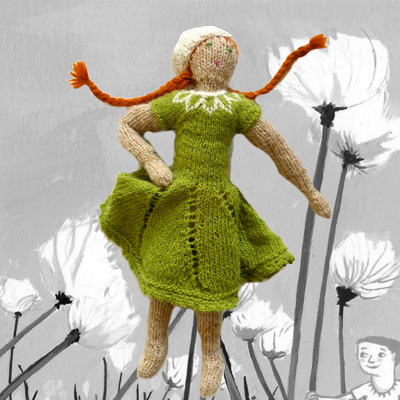 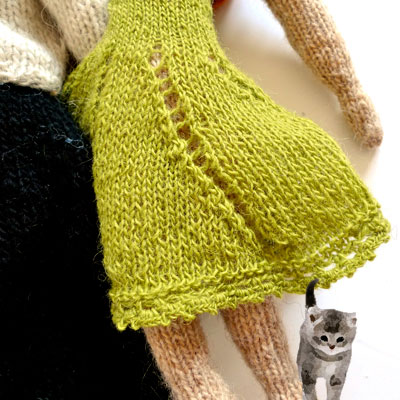 “Wow! What a pretty dress – I’m getting green with envy, ha-ha, green like the dress! Can I try it on please?” 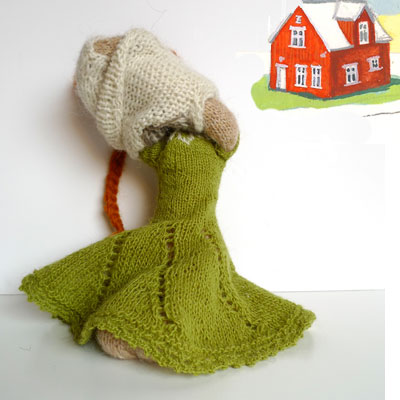 “Yes, of course, if I can try on your white sweater. But first we have something to do!”

“What?” Theodóra became suspicious. This was her first morning on the farm with Henríetta and they had already petted the bull, chased the hens, played with the kittens, climbed on the barn roof and fallen into the dung heap – which called for a shower and a change of clothes. Theodóra had had enough adventure, at least before lunch. 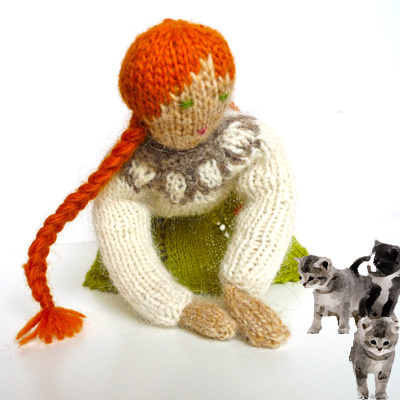 “It’s a secret! Come on – and close you eyes!” commanded Henríetta and pulled Theodóra up.

“Is this enough?” Theodóra pulled the hat over her eyes and let her friend lead her over the field.

Theodóra heard her friend run off. Kolur, the old farm dog, barked at the highway in the safety of the farm’s driveway and golden plovers sang their melancholy songs.

She felt the presence of something, but hadn’t realised what, when she heard Henríettas solemn voice:

“Theodóra, may I present Blesi. Blesi, this is my friend Theodóra. She is a bit afraid of horses, but she mustn’t fear you. You are so very old and docile.”

Horses. Henríetta had brought a horse. Theodóra broke out in a cold sweat and hot anger at the same time. Henríetta knew how afraid she was of those large beasts

“You can open your eyes now.” Henríetta spoke softly and with the same gentle singsong she used to calm bulls and lure kittens. 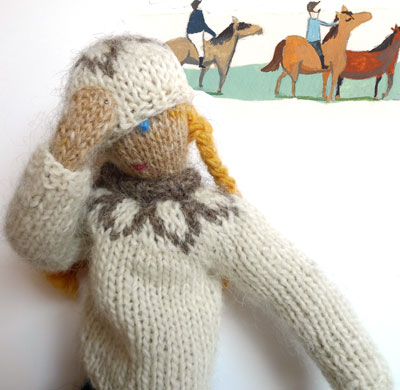 What does she think I am – some jumpy cow? thought Theodóra while she slowly pulled the hat from her eyes and opened them. Henríetta held the reins on a chestnut horse with a white blaze.

“No.” Theodóra crossed her arms on her chest.

“Just one small round in the pen? For me?” Henríetta came a little closer and looked at Theodóra with her pleading puppy eyes.

“All right” said someone in Theodóra’s own voice. All right? Was she going to ride a horse? A real-life horse? She had no idea why she agreed. But there was something in Henríetta’s eyes and voice that lured both people and animals to do her bidding. 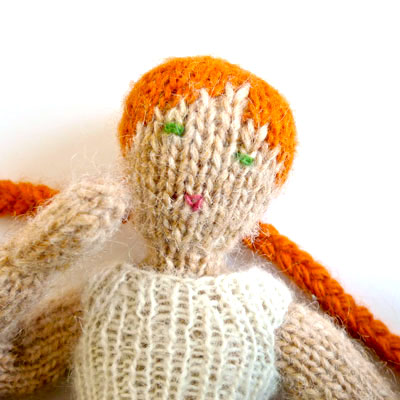 Henríetta led Blesi through the gate and closed it carefully. She eased her friend’s foot into the stirrup but Theodóra didn’t need much help. She was strong after last winter’s ballet lessons and the Blesi wasn’t quite as tall as he looked at first.

“There. Keep your legs close to the sides and hold the reins.”

“That’s it. I’ll walk beside him and lead. All you have to do is enjoy the ride.”

Henríetta gave an almost indistinguishable signal and Blesi started walking at an even, slow pace. This was not so bad, like sitting in a gently moving chair, and rocking just a little. The first two rounds were very slow, but by the third one Henrietta was jogging beside Blesi. This was almost fun; Theodóra had to admit to herself, although she was not ready to confess as much to Henríetta just yet.

“Grandma is here! Grandma, grandma!” Theodóra was startled and Blesi raised his head in surprise. All of a sudden Henríetta had jumped the gate and was running towards the driveway, where a shining red jeep was generating quite a dust cloud. 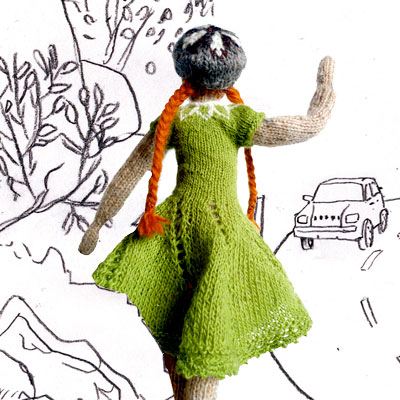 “Uh oh.” While rushing over the gate, Henríetta hit the latch with her foot and now the gate was opening, slowly but surely.

“No. No, no. Blesi don’t!” But Blesi apparently still thought he should follow Henríetta and walked through the gate towards the driveway.

Theodóra had no idea how to stop a horse and in sheer confusion she banged a heel in his flank. Blesi reacted at once. He raised his mane and was in full gallop before she realised what was happening.

I didn’t know horses could accelerate this fast. He’s just like a race car, thought Theodóra before panic took hold. This is it. I die. I’ll fall off, break my neck and die. I’ll become a ghost and haunt Henríetta!

Theodóra screamed and yanked the reins and then the miracle happened. Blesi stopped galloping and seemed to fly instead, parallel to the ground. Theodóra was no longer bouncing in the saddle and she was not afraid anymore. This was fantastic. She was flying, rushing forward on a chestnut carpet and she was completely safe. She was invincible and she could never be afraid again. 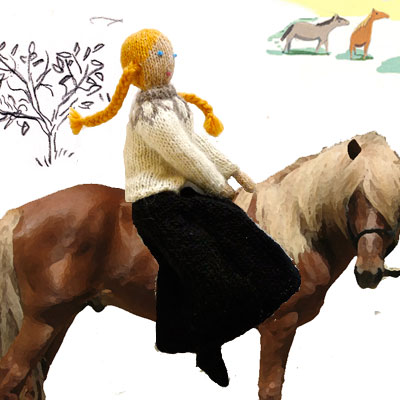 Then the sprint was suddenly over. Blesi came to a halt by the front door, as if nothing had happened, slightly out of breath after the sudden dash. Theodóra dismounted slowly while Henríetta and her grandmother hurried over.

“I, well, kind of forgot to tell you that Blesi was a racehorse in his younger days. A regional as well as a national champion. My grandfather used this smooth patch along the driveway to ride the flying pace, while he was alive…” Henríetta was shamefaced, fidgeting with the buttons on her sweater and glancing at Theodóra.

“Yes, this was a fantastic flying pace sprint. Didn’t you know that?”

Theodóra said nothing. Flying pace – she had no idea what Henríetta was talking about.

“It was incredible to see you fly again. I thought you were too old, my friend.” Henríetta’s grandma dried an errant tear and scratched the horse behind it’s ears.

“I’m so sorry that I left you in the pen. And that I let you out of it too. Can you forgive me?” 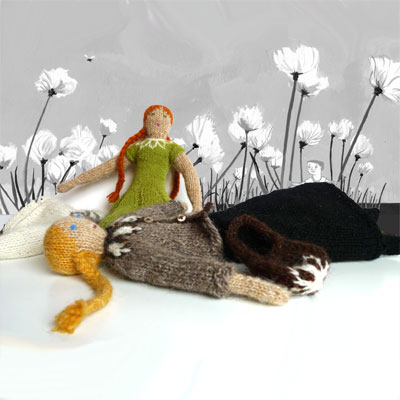 Theodóra hesitated a moment, before she passed the reins to her friend with a smile. And that was enough.

Because sometimes best friends don’t need words to understand each other perfectly. 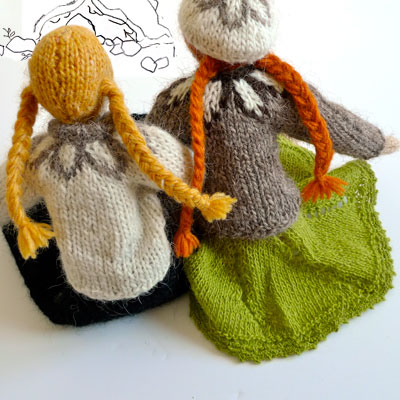 The Icelandic Knitter ©Harpa Jónsdóttir 2011
Illustrations@Charline Picard
All rights reserved. No part of this story, text, photographs or illustrations may be reproduced or transmitted in any form or by any means or by any way without written permission obtained before hand from the author.

Read the interview with Harpa, “When knitting and writing spin together”, here.

Patterns and kits for the dolls, the dog and doll clothes by Hélène Magnússon can be found here.