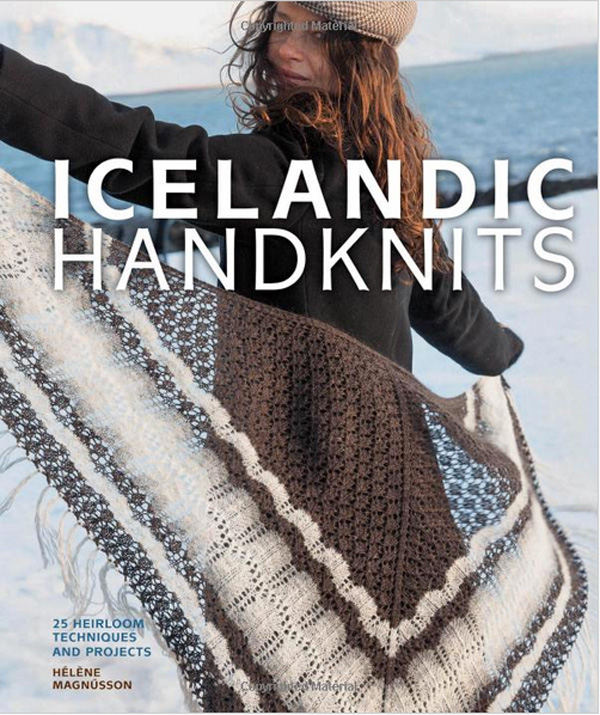 Today is the official release of my new book, Icelandic Handknits. It is inspired by the knitted artifacts in the beautiful Textile Museum in Blönduós in Iceland and gives a good overview of the Icelandic knitting traditions in the 19th century and beginning of the 20th century.
The first time I went to the Museum, I was pregnant with Sylvía, my oldest daughter who will be 12 years old in May. I had no idea at the time I was going to write a knitting book about the Museum, I didn’t know I would become a hand knit designer, I didn’t know I would become so avid in researching Icelandic knitting traditions, I didn’t know I would enthusiastically take knitters from all over the world on tours to the Museum. Nevertheless, some 12 years ago, I did take pictures of ALL the knitting in the Textile Museum. So when Voyageur Press asked me if I would like to write Icelandic Handknits, I had a precious material  already on hands and suggested we work with the Textile Museum.
I will tell you more about each of the 25 designs in the book and the making of it over the next weeks, but for now, I’m very excited to be announcing the Icelandic Handknits blog tour. I’m thrilled that so many designers I admire and respect have accepted to join the tour. Each stop will feature the book in a different way and will include a giveaway of the book so make sure to be visiting:
April 4th, 2013: Gudrun Johnston – theshetlandtrader.com
April 11th, 2013: Donna Druchunas – sheeptoshawl.com
April 18th, 2013: Woolly Wormhead – www.woollywormhead.com/blog
April 25th, 2013: Mary Jane Mucklestone – maryjanemucklestone.com
May 2nd, 2013: Susan Crawford – justcallmeruby.blogspot.com
May 9th, 2013: Terri Shea – spinningwheel.net
May 16th, 2013: Alana Dakos – www.nevernotknitting.com
May 30th, 2013: Lela nargi – astoundingknits.blogspot.com